Geography of Betul district is characterized by immensely rich biodiversity. The acres of forest areas that make up huge portion of district’s total land area and Satpuda mountain ranges located on boarder have immensely helped in making Betul geographically enriching place. Besides, there is huge reservoir of minerals and soils in the district. Here is a brief summary of geography of Betul district.Betul is located exactly between 21.92°North Latitude and 77.9°East Longitude. The total land area of Betul district is 10043 km2. 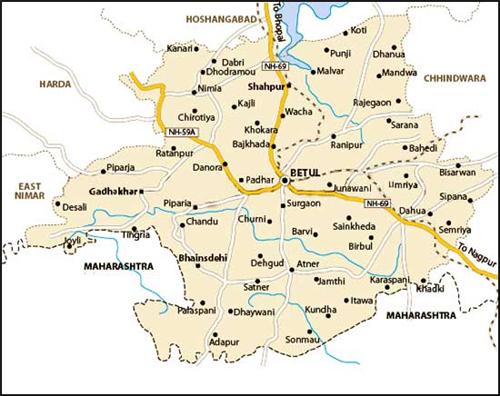 While agriculture surely makes up the bulk of land utilization in the district, forest area too takes up the huge bulk of the total land area in the region.Several important rivers flow through Betul . Ganjal River (tributary of Tapti River) Morand River and Tawa River (tributary of Narmada River) are the main rivers in the region. There certainly does exist huge reservoir of many important minerals in the district. The names of these minerals are as follows: Sand, Muram, Granite and Stone / Gitti.

With negligible presence of industries in the district, Betul is primarily an agricultural dominant land. More than 60% of district’s labor force is engaged in agriculture sector. Soybean, Maize, Sorghum, Rice, Pigeonpea are the major crops grown in this part of Madhya Pradesh. Cabbage, Potao, Brinjal, Tomato, Chilli are horticultural produce in the region.